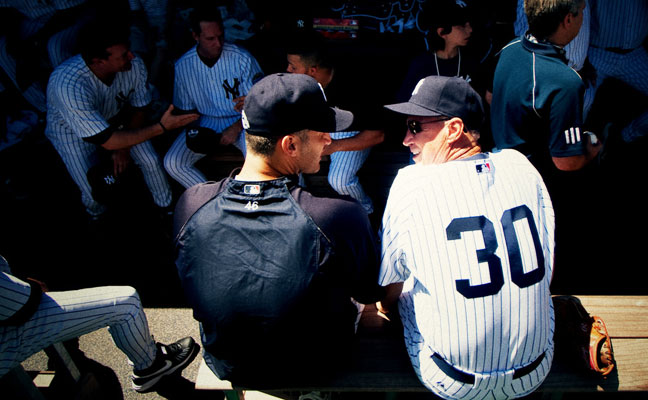 No team in no sport can do Old Timer’s Day the way the New York Yankees can do it, and it just gets better every year. Among the first-timers this time are Jason Giambi, Andy Pettitte, Aaron Boone and Nick Swisher. Prediction: Bombers 4, Clippers 3. Check out the complete roster and activity list for the event.

The following suggestions are for the 2:05pm EST Yankees-Rays matchup in Draft Kings’ Showdown/Classic mode.

Wilmer Font ($4,000). Font has been around a while. The 28-year-old Venezuelan native was signed by the Texas Rangers as an amateur free agent in June of 2006, but didn’t make his pro debut until 2012. He was DFA’s by Texas in October of 2014 and bounced around in the minors for 2 years in both the Cincinnati Reds and Toronto Blue Jays organizations.

Font was a standout pitcher during his time in the Pacific Coast League, where his strikeouts total where excellent and scouts saw him as a perfect fit for an MLB bullpen.

But Font didn’t see major league action again until signing with the Los Angeles Dodgers in 2016 and getting called up in September of that year. The Dodgers gave up on him after 3 shaky appearances. He was traded to the Oakland A’s on April 25th, 2018, then DFA’d by them on May 23rd. The A’s then traded Font to the Rays for minor league pitcher Peter Bayer on May 25th.

PREDICTION: Once again, with the Rays doing the ‘bullpen’ approach and Font being ‘the opener’, it’s not worth forecasting anything if he’s limited to an inning or two. Look for New York to do damage at any point, but most likely the second time around with the batting order.

Cleyber Torres ($4,300). It’s almost time to put an APB out on the young second baseman — no towering home run in a few days! Look for Torres to rejoin the fun this afternoon, you just know he’s going to have a big day with Yankees royalty present.

Didi Gregoruis ($4,500). After a May to forget, the star shortstop should be a stress-free pick for your lineup. He’s definitely zeroed in again, barreling up on the ball and not getting fooled at the plate.

Gary Sanchez ($4,000). Is The Kracken back? We say maybe — but it’s worth a shot at $4K dineros. His home run blast yesterday brought tears to one’s eyes remembering what used to be, and what could be once again.

CC Sabathia Is No Old Timer

CC Sabathia ($7,600). The reinvention and rejuvenation of Carsten Charles Sabathia has been well-documented. The 17-year veteran is in the midst of yet another solid season of work for the Yankees, even with a recent rough patch in May that was un-CC like.

At home, CC keeps left-handed batters to a .172 average, pitching away from and negating that enticing short porch in Yankee Stadium. Righty hitters have hurt him more at home with a BA of .264 and launching 7 home runs at The Stadium.

Today will be Sabathia’s first time facing Tampa in 2018, but has 45 career starts against the Rays with a 16-14 record and 3.54 ERA. He has allowed 40 home runs over 296 innings, and all of those to Evan Longoria most likely.

PREDICTION: On Old Timers’s Day, CC is going to show the old geezers that Yankee Stadium is still the place to be, and pinstripe pride was never greater. Look for 6 solid innings of crafty pitching and 6+ strikeouts from The Big Man.

Jake Bauers ($3,800). Bauers is one of Tampa’s most promising young talents and certainly showing that since being brought up.

Matt Duffy ($3,400). Duffy continues to have quality at-bats during this series, and is an excellent value pick at third base if Miguel Andujar is out of your budget.

Adeiny Hechavarria ($2,700). If’s he in the lineup, Hechavarria is a value pick consideration at this price against CC, with 4 hits in 10 ABs including a double and triple. The Rays’ shortstop has hurt the Yankees in the past with some timely hitting.