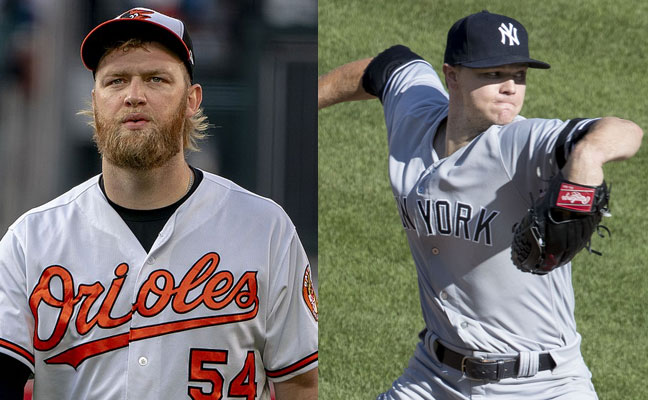 Tonight will be the first meeting between these clubs since Baltimore handed New York an old-fashioned ass-whuppin’ in early April, taking 3 of 4 games at Yankee Stadium. And the New York Yankees have two things to worry about. Andrew Cashner and Sonny Gray.

Gray we’ll get to in a minute, but Cashner can give the pinstripe hitters fits when he’s on — which hasn’t been often yet in 2018. Sample matchup sizes with the current roster are small, but the 6’6, 235 pound right-hander out of Conroe, Texas has enjoyed success against New York over 2 career starts, pitching to a 1.38 ERA over 13 innings with 10 Ks. Only Didi Gregorius and Aaron Judge have taken Cashner deep.

Cashner relies mostly on his 93-mph sinker and 94-mph four-seam fastball — which produces a good amount of fly balls. He will mix in a occasional cutter (88-mph) which trends to produce more ground balls. But look for him to pound the bottom of the strike zone and hope the umpire calls them low tonight.

The Problem With Sonny Gray

After taking a major step backward in his last start, Gray needs to regroup — now, quick and in a hurry. That could be a tall order at Camden Yards, but the clock is ticking. Is it between the ears or in the pitch execution. Or both? While we can pretty much dismiss the ‘personal catcher’ concept or ‘tipping pitches’, could it be an injury? Gray has been sidelined in the past with arm issues, is he keeping quiet about something? Whatever the case, a solution has to be in the offing sooner rather than later. Tonight could be a tell which way we’re going with this saga.

The following suggestions are for the 4:05 EST time slot of contests, which include the Yankees-Orioles matchup.

Aaron Nola ($11,100). We’ve been high on Philly hurlers for a while now and Nola has stepped it up so far in 2018. Nola is coming off a 6.1 inning, 1-hit, 10-strikeout performance against Toronto. He’s sporting a 2.27 ERA and 0.98 WHIP. This will be his second career start against the Dodgers, who have been heating up in the NL West, but look for Nola to slow them down tonight in LaLa Land.

ALTERNATE: Jake Odorizzi ($7,700). Odorizzi has quitely been putting together a solid campaign in his first season with the Minnesota Twins.

Gleyber Torres ($4,700). It’s basically ‘Torres goes in your lineup until further notice’. We’re looking for a way to have him be the default second base selection on our Draft Kings app, as well. This will be Torres’ first trip to hitter-friendly Camden Yards, so we’re expecting the usual output from the young standout.

For an alternate red-hot second baseman, consider Jose Altuve ($4,800), who smacks Boston starter Drew Pomeranz around to the tune of a .412 BA over 17 plate appearances.

Jean Segura ($4,600). The other night, a Mariner’s broadcaster referred to Segura as ‘Jean, Jean, the hittin’ machine’, and he wasn’t kidding. The slugging shortstop seems back from the injuries that derailed his dependable offense output early last season. Segura is behind the M’s recent run of success and no reason for him to stop soon.

Aaron Judge ($5,700). There is no team Aaron Judge enjoys facing more than the Baltimore Orioles. If Cashner’s sinker is not sinking, or his four-seamers get too much of the plate, Judge should do some serious damage with the lumber tonight.

Austin Meadows ($4,300). The rookie outfielder has been moved up to the 2-hole in the batting order, so he’ll have the opportunity to increase his DKFP total. Keep an eye on this young man.


Remember this is for speculation only, not meant to be taken as gospel. We exist under the manta that “You can’t predict baseball” but it’s fun trying. Good luck with your lineup and let’s go Yankees!