Severino Needs To Figure It Out Or Yanks Are Out 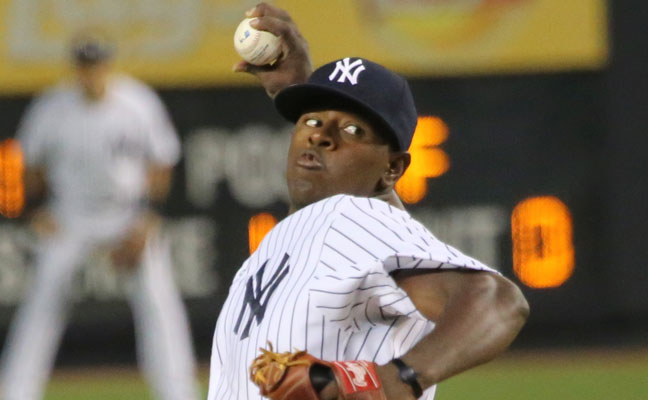 The calendar has turned a page and the Yankees need ace Luis Severino to do the same. Put a forgettable month of July (2-2 in 5 starts, 6.58 ERA) behind him and return to his un-hittable bad self. He’ll get that chance tonight in Fenway Park, as the Bronx Bombers try to salvage this series, and maybe their disappearing shot at the AL East crown.

The moneyline favors New York +120 (-129 Boston), with an over/under of 9. Four of the last six Yankee-Red Sox matchups in Fenway have exceeded the over, and New York has now dropped 4 of their last 5 in Fenway. Boston has been a home underdog only twice before tonight this season, going 1-1. They also lead MLB with the best overall record against division opponents at 34-14.

Severino vs The Sawx

So far in 2018, Severino (14-4, 2.94 ERA) has pitched to a 3.57 ERA against Boston, striking out 23 over 17.1 innings while allowing 7 earned runs — but his one start in Fenway didn’t go well. Much like last night, on April 10th the Sox put a brutal 14-1 beatdown on the Yankees in the midst of their extraordinary start. Severino lasted 5 innings, was tagged with 5 earned runs and the loss.

Who does Sevy have to watch out for? Pretty much the usual suspects, starting with Andrew Benintendi — who might send a limo to make sure Luis gets to the park tonight. Benintendi is 10-22 (.455) with 2 doubles, 1 triple and 2 home runs. As predicted, Mookie Betts came out of his mini-funk last night, and also sees Severino well at a 7-24 clip (.292) with 3 doubles and 4 walks. The always dangerous J.D. Martinez is 3-11 (.273), and must be pitched carefully to as well.

Porcello vs The Yankees

Rick Porcello (13-4, 4.03 ERA) will be making his third start against the Yankees tonight in 2018. He split the previous two, losing at Yankee Stadium on May 9th, and notching a win in Boston on April 12th.

Unfortunately the New York Yankee who would send a limo to make sure Porcello gets to the park on time is of no help. Jacoby Ellsbury is 12-34 (.353) with 2 doubles and 4 home runs against the red Sox righty.

Brett Gardner, however, has the most ABs on the team against him, going 61-52 (.308) with 5 doubles and 2 home runs. Giancarlo Stanton, who loves to hit Red Sox pitching, is 3-5 with 2 doubles against Porcello. We’re looking for a big night from Stanton, right-handed hurler or not.

While the odds seem to stacked against the Yankees, they are indeed capable tearing it up in Fenway. More importantly this is a must win game for New York, not Boston. While the Red Sox would love nothing less than a sweep and a 9.5 game lead, they’ll be content to buy time with a series split and knock 4 more games off the schedule.

The Yankees can’t afford that. This isn’t 1978, and they can’t let this deficit get out of hand. Tonight’s game is all set up for good things to happen. The Yankees ace is on the mound, who needs a big outing. The club that prides itself on never giving up looked like it did just that last night. They got embarrassed, and need to bounce back. Games like this are where leaders emerge. Let’s see who answers the bell for New York.

Check back later this afternoon when lineups are announced for updated info.