No Luck, No W, In Frustrating Loss 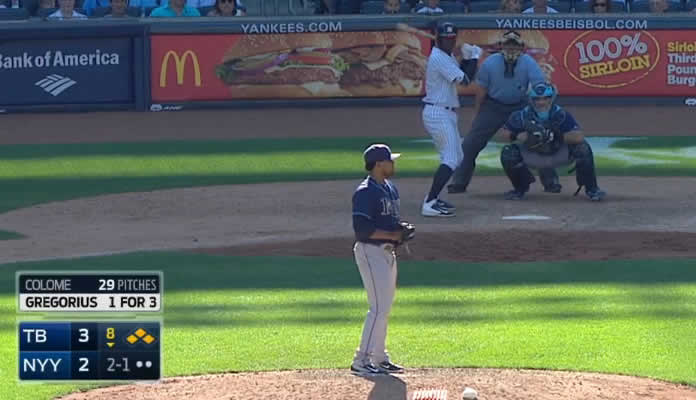 Game 134 / 75-59 / 2nd / -1.5 GB : Nathan Eovaldi had one sloppy frame today, but it was enough to seal New York’s fate in a 3-2 loss to the Tampa Rays. Luck was not on the Yankees side in this defensively well-played game, as they hit the ball on the screws often but usually finding only a Tampa glove.

Wasting yesterday’s gain in the standing — the first time in the last two weeks that the Blue Jays lost on a day the Yankees won — the deficit is back to 1.5 games, but one in the loss column. With the 7 games remaining against Toronto, New York cannot afford to drop 3 or 4 back before meeting them this coming weekend. Being 3 games back would mean the Yankees would have to go 6-1 against the Jays in those games. Possible, but unlikely. They have to keep it here at worst.
Here’s the box score, full recap, and video highlights.

“The way we swung the bats and how patient we were and our ability to get on base and we started with two outs, it’s unfortunate. But like I said, that’s part of the game. You’re going to line out sometimes, and I like the approach. I like the at-bats. We just didn’t get the results we wanted.” ‐ Joe Girardi  (h/t: Post-game notes from Chad Jennings / LoHud)

MEMORY LANE : On today’s date in 2009, the Yankees released current Tampa Rays manager Kevin Cash. Cash appeared in 10 games after signing a minor league deal with the club in December of 2008, spending most of the season at AAA Scranton/Wilkes-Barre. He was called up in early May 2009 after both Jorge Posada and Jose Molina suffered injuries, only to be sent back down on May 29th after injuries of his own… PEDRO RAMOS : On this date in 1964, the Yankees traded Ralph Terry, Bud Dale and $75,000 to the Cleveland Indians for Cuban-born right-hander Pedro Ramos. A solid starter early in his career, Ramos appeared in 90 games for New York over the 1964-65-66 seasons mostly in relief, compiling a 9-14 record, and an ERA that would pay big bucks in today’s game.

After the 1966 season, the Yankees traded Ramos to the Philadelphia Phillies. The Phils released him mid-season in 1967, and he would spend time in the Pittsburgh Pirates, Cincinnati Reds and Washington Senators before his playing days ended in 1970. Years earlier, in 1956, as a member of the Washington Senators, Ramos is also remembered for being the pitcher that served up the home run that Mickey Mantle almost hit out of Yankee Stadium, denting the famous facade over the third deck in left field.

Almost a decade after his career ended, Ramos got caught up in the legendary Miami drug scene of the era, getting arrested with a kilo of cocaine and weapons in his car, accompanied by a man described as a big player in drug game. More kilos were later found at his home. He was sentenced to a 3-year stretch in 1982. For more on Ramos, check out “Pedro Ramos’s Biggest Loss” (New York Times, 1982), and “Oh, What a Relief: Pedro Ramos“, from The 1960s Baseball Blog …
(h/t: Baseball-Reference.com, Today in Baseball History)

FOOTNOTES : Happy 40th Birthday to old friend Randol Doyle “Randy” Choate! Currently pitching for the St. Louis Cardinals, the Yankees selected Choate in the 5th round of the 1997 Amateur Draft. The San Antonio, Texas native made his MLB debut on July 1, 2000 in a relief appearance against the then-Tampa Bay Devil Rays. In 2003, Choate was traded to the Montreal Expos along with Nick Johnson and Juan Rivera for pitcher Javier Vazquez. Choate earned a ring as a member of the 2000 World Champion New York Yankees.