Nat's Lineup Another Gauntlet For A Resurgent Sonny Gray 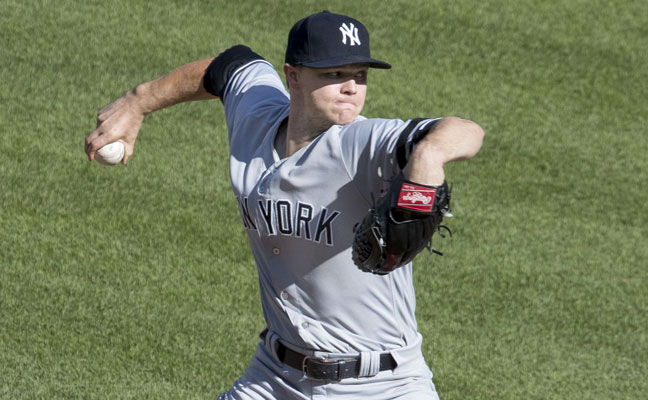 Paulie nailed it last night on the WPIX broadcast. You look at the offensive numbers and there is no way this club is 43-19. They are getting just enough timely hitting from a player or two to squeak out a victory. It kinda disproves Kenny Singleton’s theory that ‘3 can’t carry 9, while 9 can carry 3’. The real key has been outstanding pitching and superb defense, both of which the Yankees delivered last night against the Nationals en route to their 3-0 shutout victory.

The Yankees may have dodged a bullet by missing Stephen Strasburg, who was just placed on the DL, but on the other hand the somewhat unknown rookie pitcher looms and that rarely ends well, or least it seems. Let’s see what we have on hand.

The following suggestions are for the 7:05pm EST Yankees-Nationals matchup in Draft Kings’ Classic mode.

What Could Possibly Go Wrong?

Erick Fedde ($5,900). When there is little scouting and game experience to go on, it’s usually advantage pitcher — at least the first few times around the order, which could be all it takes. The Nationals brought up Fedde from Triple-A Syracuse to take Strasburg’s place at least for this start.

The 6′ 4″ right-hander leans on his cutter and four-seam fastball (both 95 mph) and sinker (89 mph), of which the sinker results in a higher than average number of fly balls, not always a good thing in Yankee Stadium.

Fedde’s only appearance in 2018 was a start in San Diego on May 23rd were he took the loss after going 5.2 and allowing 3 earned runs, but striking out 6. He received no run support that day as the Nationals where shut down by Tyson Ross and the Padres bullpen. For a trivia side note, Fedde was high-school teammates in Las Vegas with Bryce Harper, who was a catcher on that squad.

PREDICTION: Fedde should keep the score competitive until it’s a bullpen game, thanks in most part to the Yankees continued (almost) team wide funk at the plate.

Who Could Give Fedde Trouble?

Didi Gregorious ($4,100) Is he back? We say yes. Two absolute bombs yesterday on top of a good stretch of at-bats putting barrel on ball is all the evidence needed. Thanks to his May-long slump, the draft price has come way down over $1,400. Time to take advantage of that while you can.

Austin Romine ($3,600) A secret weapon at the catcher position and flying under the radar at $3,600 scheckles, Romine has been killin’ it with runners in scoring postion and clutch hitting overall with a .348 BA with 4 home runs and 20 RBI, mashing lefties (.364) and righties (.341) with equal mayhem.

Sonny Gray ($6,900). The Sonny Gray we saw in his last start in Toronto was the Sonny Gray we traded for. Eight masterful innings of scoreless, 2-hit baseball striking out 8 in the process. Predictably the Yankees offense didn’t wake up until the 13th inning when Aaron Judge and Giancarlo Stanton went deep in a 3-0 final.

PREDICTION: If he works quick, listens to catcher Austin Romine, and pounds the upper half of the strike zone, Gray answers the bell and turns in another solid outing.

With a sample size of Nationals hitters not worth bothering with, let’s look at who is swinging the bat well. The scary thing about Washington’s lineup is that it’s packed with power with little let up at any point. And they just got Daniel Murphy back to boot.

Matt Adams ($3,800) With his big swing, Adams is a danger in any park with hitter-friendly proportions — and the price is reasonable. One mistake pitch and Adams will more often than not crush it.

Michael Taylor ($3,900) The speedy outfielder is a sneaky good Draft King weapon who can contribute a healthy point total for a very reasonable investment. Of late, Taylor has been putting up better overall numbers on the road than at home, a pick to definitely consider on any night.

In your overall lineup, never go to sleep on third-baseman Miguel Andujar ($4,200). Aaron Boone gave him a night off last night, but he’ll be swinging’ for the downs tonight.