How to get your DraftKings MLB groove back in 2020 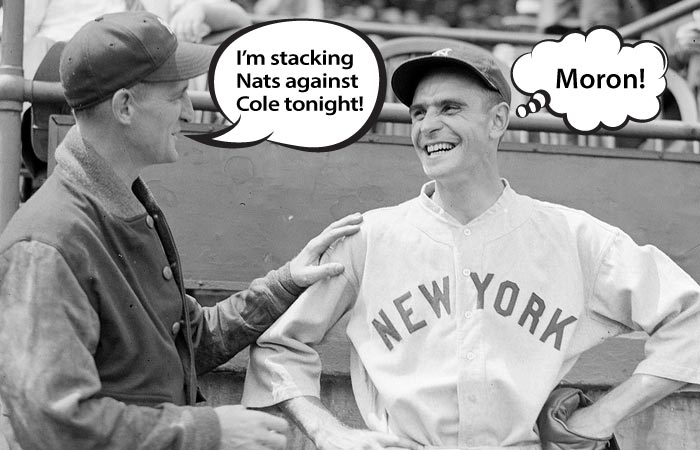 They’ve thrown everything at us except the kitchen sink — from pandemics to murder hornets — and here we are, ready to resume America’s Pastime. Now we need to sharpen our handicapping game to rock DraftKings daily mash up.

Follow these guidelines and your picks should be in play for a few dineros more often than not.

The first thing to look at is what the Las Vegas oddsmakers are saying. The casinos and sportsbooks spend a ton of money on research and analytics, while hiring the best handicappers in the business. Wildly inaccurate point spreads can cost a casino millions, and there’s a reason they never seem to be on the short end of a wager.

One of the largest losses in Vegas sportsbook history happened just recently and it involved professional baseball. But it wasn’t because some bad point spreads were offered to bettors — it was human error. Due to confusion over the starting times, wagers were allowed to be placed on Korean and Chinese pro baseball games after the games actually started. One lucky bettor pocketed $137K.

The oddsmakers are not always correct, but a spread will tell you at least who the smart money is on as to who will win the game. Not a bad place to start.

Start small. DraftKings offers free, 10¢, and 25¢ contests where you can get your feet wet while not breaking the bank. These smaller games do not usually offer the huge payouts that attract the more experienced players, so the competition won’t be as stiff. The the 50/50 contests, for example, you just have to finish in the top 50% of participants for a payout.

That would be K/9, WHIP, GB% and FIP. You can study these in-depth from resources like Advanced Stats from mlb.com, but the logic is as follows:

K/9 is the number of strikeouts a pitcher averages over a nine inning game. In DraftKings, strikeouts are a pitcher’s best friend and is an important factor in how your overall lineup preforms.

WHIP is ‘walks plus hits per inning pitched‘. You simply add the amount of walks issued and hits allowed by a pitcher, and divide that by the amount of innings pitched. The lower the number the better. For example, a WHIP of 1.00 is considered outstanding, as that translates to an average of only 1 hit or walk per inning. Hard for opposing teams to score a lot of runs that way!

While there are many vital stats to determine the effectiveness of a pitcher, these four are a solid place to start getting your head around the process.

Just like with pitching, drafting the right hitters requires a basic grip on certain offensive statistics. Let’s start with understanding what type of pitcher a hitter will be facing. One popular theory is drafting a right-handed hitter against a left-handed pitcher, and visa-versa. The age-old thinking is that the batter sees the ball a little better from an opposite-armed pitcher, hence a slight advantage.

Also, scan over recent hitting stats and determine who is on a hot streak. Players can be on absolute fire for spurts of 3, 5 or more games at a stretch, then go cold as ice for 20 games. You have to catch these hitters when they’re raking, and stay with them until they start going cold.

One last initial thing to consider is where the game is being played. As no two parks in MLB are the same, different conditions exist beyond the daily weather. Some ballparks have smaller dimensions, hence more home runs are hit there versus larger parks that tend to favor pitchers. Know where your guys are swinging the lumber and take that into consideration.

Stacking is when you draft multiple hitters from the same team in a lineup, and preferably close to each other in the lineup order. You can stack from 2 to 7 hitters from one team (depending if your budget allows that). If the team rallies for a bunch of runs, your picks can get increased point totals. For example, hitter one strokes a triple. The next batter in your lineup doubles him in. Hitter two gets points for both a double and a RBI. Hitter one gets points for the triple and scoring a run.

(6) • Draft Hitters Near The Top of the Lineup

A batter who hits in the top 1-2-3-4 slots in a lineup will see more at-bats over the course of a game than the guy hitting 8th, so it make sense to pick batters who are slotted high in their team’s batting order that game. Especially keep an eye out for speed-demons. Speedy guys are often placed in the leadoff spot, who can then steal a base and get into scoring position for the big hitters coming up next — and a stolen base is worth 5 points in DraftKings!

Sage advice from a bookie an uncle used some 50 years ago. I’ll leave it at that.

This is by no means meant to be a total handbook on how to win a daily fantasy baseball or DraftKings in particular, just a quick-start guide for newbies, or a refresher for someone with a little more experience.

We’ll be getting way more in-depth in future posts on strategies and concepts for DraftKings fantasy baseball, and how they can be applied your New York Yankees picks. Good luck and Let’s Go, Yankees!