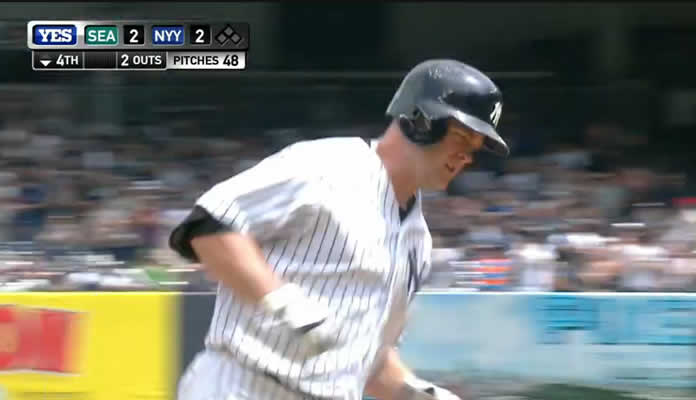 Game 90 / 49-41 / 1st / +3.5G : The Yankees offense failed to overcome Whats His Face‘s 2 home run afternoon, dropping the middle game of the weekend series 4-3 to Seattle. Some guy that used to play second base around here — who will never have a plaque in Monument Park or his number retired — torched Michael Pineda for a pair of 2-run homers. Brian McCann had a 2-run shot of his own, and New York made it interesting in the 9th but couldn’t plate the tying run from second with two out.

“I don’t know how comfortable he is when you have 40,000 people booing you. Robby’s Robby. Robby’s going to hit.” ‐ M’s manager Lloyd McClendon

MEMORY LANE : On today’s date in 1987, Don Mattingly tied Dale Long’s 31-year-old Major League record when he hit a home run for the eighth consecutive game in the Yankees’ 7-2 loss to the Texas Rangers….

Happy Birthday to Brooklyn’s own Joe Torre, who turns 75 today. Recent vintage Yankee fans know him as the manager that guided the club to 4 World Series victories, but his Hall of Fame career included an 18-year stint as a player, all in the National League for the Braves, Cardinals and Mets. Torre finished with a career average of .297, hitting 252 home runs, 1,185 RBI, and 2,342 hits. Joe is going to hate being reminded of this, but on July 21, 1975 he became the first player in National League history to ground into 4 double-plays in a single game, and only the third player in MLB history to do so. But he’s from Brooklyn, so he can take it. Happy Birthday, Joe! We love you!

On July 18, 1965, the Johnny Keane (pictured) managed Yankees fell to the Gil Hodges-managed Washington Senators, 3-0 behind a 2-hit shutout performance by ‘Nats starter Mike McCormick. New York had a record of 44-47 at this point, in 6th place, 12.5 games out, and a harbinger of things to come. After their loss to the St. Louis Cardinals in the 1964 World Series which went 7 games and resulted in the firing of manager Yogi Berra, the 1965 season began a stretch of not making the post-season that lasted over a decade. The 1976 squad snapped that skid, although getting swept by the Big Red Machine in the World Series, the club was poised for greatness in the coming years. Thank you, George Steinbrenner!

Remember Pat Vendetti? The twice-drafted ambidextrous prospect (initially in the 2007 Amateur Draft when he refused to sign, and again in 2008 when he was 620th overall pick in Round 20 of the draft and then decided to sign) by the Yankees who finally made his major league debut this year with the Oakland A’s? Well, he wasn’t the first to throw with both hands. On July 18, 1882, Tony Mullane of Louisville pitched with both hands in a Major League game at Baltimore. Normally a right-hander, Mullane switched to the left hand in the fourth inning. He was charged with the loss in a 9-8 victory by the Baltimore club.
(h/t: Today in Baseball History, Baseball-Reference.com)
FOOTNOTES : (Whats His Face) and Kyle Seager are the fourth pair of visiting teammates to record multi-homer games in the same series at the current Yankee Stadium. Brandon Moss and Yoenis Cespedes did it for the A’s last year, Brandon Allen and Coco Crisp did it for Oakland in 2011, and Russell Branyan and Ichiro Suzuki did it for the Mariners in 2010. (— from LoHud post game wrap) … Tomorrow’s series finale, and the last time New York will see the Mariners this season, features ‘King’ Felix Hernandez (11-5, 2.84) vs CC Sabathia (4-8, 5.47) in an afternoon tilt that begins at 1PM EST …