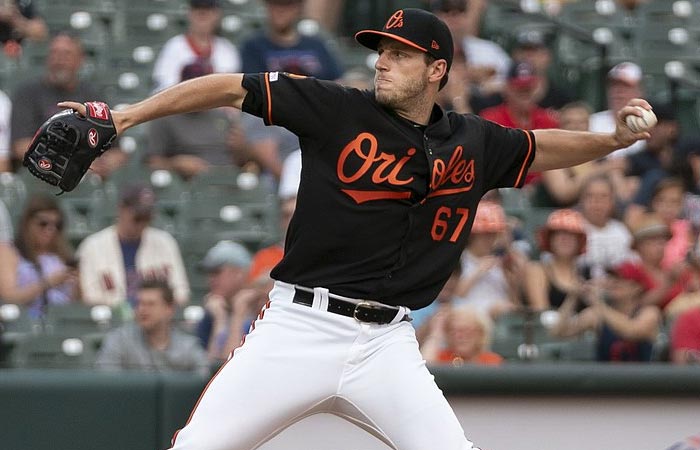 J.A. Happ will take the mound for New York in tonight’s finale of this 2-game set at Camden Yards, facing O’s lefty John Means. Tonight’s contest is somewhat of a rematch of the March 31, 2019 tilt in The Bronx, although Dylan Bundy started for Baltimore that night and was replaced by Means in the 4th. Orioles hitters jumped Happ in the first as Renato Nunez launched a 3-run homer, and Trey Mancini added a solo shot in the 3rd. Happ lasted only 4 innings and took the loss in the 7-5 O’s victory.

BALLPARK CONDITIONS : It will be partly cloudy all today in Charm City, with temps around 93°, with a slight wind (7mph) and a 15-30% chance of rain. By game time (7:05pm EST), the chance of thunderstorms will start to increase, with a 45% probability by 8:00pm.

Means was an 11th round pick for Baltimore in the 2014 MLB Amateur Draft, and worked his way through their system until being called up on September 24, 2018. He tossed a no-hitter for the Class A Delmarva Shorebirds in 2015.

He went 12-11 with a 3.60 ERA and 121 strikeouts in 2019, a definite bright spot in a down year for the organization — that saw him selected to the American League All-Star squad, and finish second in the vote total for the American League Rookie of the Year.

Means’ repertoire features a four-seam fastball in the low 90s, with a solid changeup that is about 10mph slower and produces a 25% swing and miss rate. He mixes in a mid-80s slider and a slow breaking ball with sick movement. His four-seamer results in a higher number of fly balls than the average pitcher.

As a team, the Yankees are off to a rough start against left-handed pitching in 2020 with a .148 BA and only one home run. Small sample size, but only Gleyber Torres ($5,100) stands out with a 3-4 mark and 1 HR against southpaws. Overall, the hottest hitters in pinstripes at present include DJ LeMahieu and Giancarlo Stanton.

INJURED LIST : Yankees on the IL include Aroldis Chapman and Luis Cessa (both COVID-19, 10-Day), Masahiro Tanaka (concussion, 10-Day) and Luis Severino (elbow, out for the season).