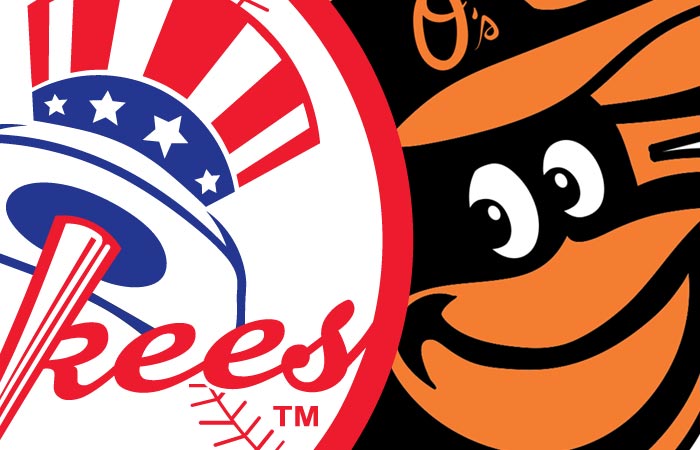 After back to back postponements wiped the 2 game set in Philly off the schedule for now, the Yankees head to what is once again Yankee Stadium South — Oriole Park at Camden Yards in Charm City. Here’s quick rundown on tonight’s matchup to help put your DraftKings fantasy MLB lineups together.

THE WISE GUYS : The Yankees are strongly favored tonight over Baltimore -315 to +285. The under/over is 9.

THE STREAKS : The Bronx Bombers are 10-0 straight up over their last 10 games vs the Birds, and the O/U has gone over in each game.

BALLPARK CONDITIONS : Weather forecasts for gametime are sunny and 91° with zero chance of rain and 5mph winds from the south. Camden Yards historically is one the most favorable park for hitters, placing 4th overall in 2019 for total home runs with an average of 1.262 per game.

Wojciechowski, 31, is a native of South Carolina who was a first-round pick by the Toronto Blue Jays in the 2010 MLB Amateur Draft. In 2012, he was traded to the Astros in a deal that brought J.A. Happ among other players to The Jays. He made his pro debut as a starter for Houston in 2015, but was DFA’d in mid-May after a tough stretch. Since then he bounced around 6 organizations, including his now second stint with Baltimore.

His bread and butter pitch is a four-seam fastball (92mph) and low-80s slider. A mid-80s cutter is also in his repertoire. He has a tendency to generate more fly balls than league average, which is not always a good thing in this ballpark — and against the Yankees lineup.

Wojciechowski’s last start against the Yankees was August 6, 2019 at Camden Yards — a 9-4 victory for New York. Over 4 innings, he was touched for 5 earned runs, including homeruns from Mike Tauchman, DJ LeMahieu and Didi Gregorius, although he worked in 5 strikeouts as well.

ORIOLES LINEUP : Yankees starter Gerrit Cole has 2 career starts against Baltimore (one at Camden Yards), resulting in a overall 0-0 mark with a 1.38 ERA, including 18 strikeouts over 13 innings.

INJURED LIST : Yankees on the IL include Aroldis Chapman and Luis Cessa (both COVID-19, 10-day), Masahiro Tanaka (concussion, 10-day) and Luis Severino (elbow, out for the season).

Check back in a few hours when the lineups are officially announced and we’ll see what surprises await the Yankees for Game # 4 of this fill-in-the-blank MLB season. Good luck on your lineups, and Let’s Go, Yankees!