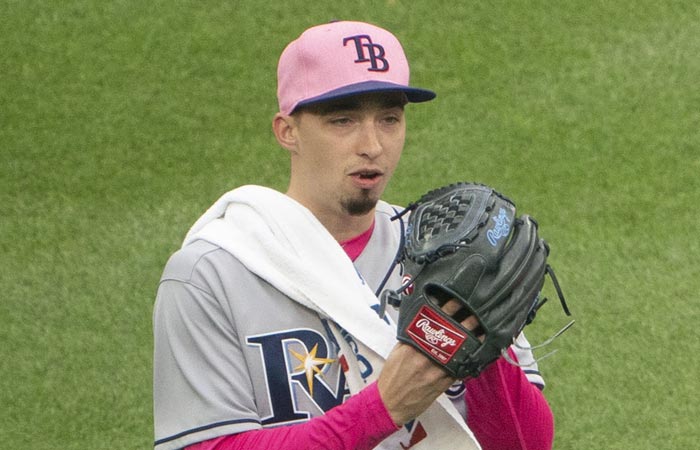 The 5-7 Tampa Rays enter tonight’s series opener with the Yankees as a team going in the wrong direction. In 2019, the Rays caught MLB sleeping on them and unexpectedly posted over 90 wins. So far in 2020, they’ve dropped 6 of their last 7 games, but only one at home.

Tonight begins a stretch of 21 games for Tampa against AL East division opponents, including 7 against the Yankees.

BALLPARK CONDITIONS : The temperature should be a pleasant 72° inside Tropicana Field, a domed stadium in St. Petersburg, Florida with horrible lighting and Little League ground rules (see ground rules here).

PITCHING MATCHUP : The Yankees will not be seeing Tampa’s numero uno starter at full strength. The 2018 AL Cy Young Award winner Blake Snell (0-0, 5.40 ERA, WHIP 1.80, $16,200) is on a short leash at the outset after an injury plagued 2019. With a variety of aliments — toe, elbow and ultimately shoulder fatigue shutting him down, last season saw a drop in innings pitched and strikeouts, and a rise in hard hit baseballs and ERA.

Over his first two starts (Baltimore and Toronto) Snell has logged a total of 5 innings but expected to push it a bit tonight, maybe to 4 innings.

Nine of those 18 career starts have come in Tropicana Field where he has posted a 5-3 mark with 4.33 ERA. Tanaka will give up the home run ball even in some of his best outings, and the Rays tend to hit him better at home than in Yankee Stadium.

YANKEES HITTING NOTES : While Snell can give the Bombers fits at times, there is one Yankee already reserving the proverbial limo ride to the ballpark for him tonight, and that is none other than The Kracken — who may just be shaking off the early season rust!

RAYS HITTING NOTES : This is not a lineup with a lot of household names, but they’re a complete ballclub whom you take lightly at your own peril. The Rays home run leaders are Brandon Lowe ($9,400) and Hunter Renfroe ($7,400) with 2 each, but there are a lot of guys with pop up and down the roster. Being in the same division with the Yankees, one would expect more plate appearances against Tanaka, but only OF Kevin Kiermaier ($6,200) has more than 21.

IMPORTANT : Check back after the official lineups have been announced (usually by 2pm EST), and definitely double-check your DraftKings MLB fantasy line at least 15-20 minutes prior to gametime (6:40pm EST/3:40pm PT) to make sure all of your picks are starting. Good luck, and Let’s Go Yankees!