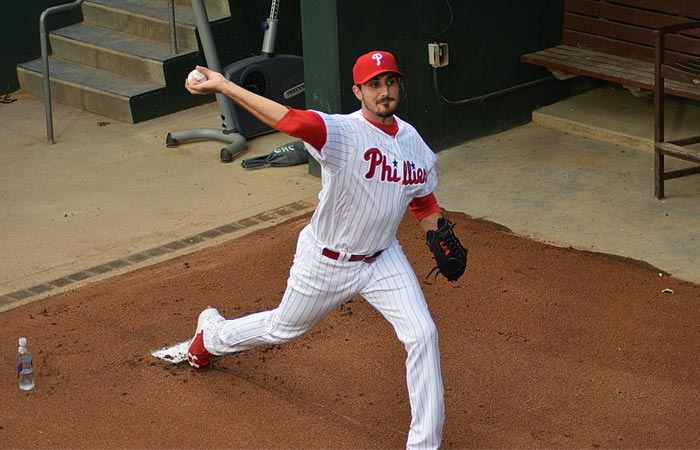 The first game of yesterday’s doubleheader was nothing more than a reminder from the baseball gods that the Yankees were not going to go 59-1 this “season”. Shaky pitching, terrible defense and Angel Hernandez behind the plate is all you need for a train wreck of a ballgame game. And the 11-7 loss was that and more. Here’s the obituary. Game two was more like it, a 3-1 drama-free victory.

BALLPARK CONDITIONS : Weather forecasts for gametime include spots of isolated and scattered thundershowers with temps in the mid-70s, with a slight breeze of 6mph. Does not sound like anything to postpone the contest, but keep an eye on the reports leading up to 6:05pm EST.

YANKEES HITTING NOTES : Sample sizes against Eflin are too small for measure, but let’s see who’s off to a fast start against right-handed pitching:

PHILLES HITTING NOTES : Sample sizes against Montgomery are also too small for measure, but while there are some professional hitters in Joe Girardi’s lineup, they are struggling against left-handed pitching (.182 BA). Here’s who to consider for your lineup:

ROSTER MOVES : As rosters contract from 30 players to 28, the Yankees send down IF/OF Miguel Andujar, P Nick Nelson, and IF Thairo Estrada. It appears P Ben Heller may be called up as Aroldis Chapman is ‘not ready yet’ according to manager Aaron Boone.

IMPORTANT : Check back after the official lineups have been announced (usually by 2pm EST), and definitely double-check your DraftKings MLB fantasy line at least 15-20 minutes prior to gametime (6:05pm EST/3:05pm PT) to make sure all of your picks are starting. Good luck, and Let’s Go Yankees!