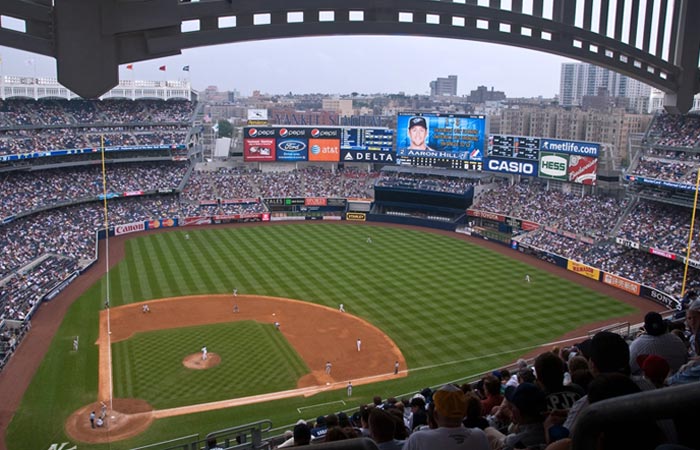 The Tampa Rays come to the The Bronx on a roll, victors in 9 of their last 11 games. They are keeping the first place Yankees within a 2.5* game reach and plan to leave town with the division lead. (*UPDATE: DEPT. OF CORRECTIONS: We erroneously indicated this would be a 2-game set against Tampa, not 3. Sorry ’bout that).

Masahiro Tanaka ($7,900) will have something to say about that tonight, as the pressure will be notched up slightly given the New York firepower idling on the Injured List — DJ LeMahieu, Aaron Judge and Giancarlo Stanton.

The pitching matchup will be a repeat of the August 7th clash in Tampa, when Tanaka tossed 5 shutout innings en route to a 1-0 Yankees loss. Rays starter Blake Snell ($9,500) was on a pitch count but struck out 5 over 3 innings. Neither Snell nor Tanaka figured in the decision.

THE WISE GUYS : The sportsbooks have the pinstripes a home underdog tonight, with a moneyline consensus of Tampa -124, New York +114. The Under/Over opened at 8.5, where it remains.

BALLPARK CONDITIONS : No wet stuff in tonight’s forecast as the temperature in The Bronx will be 81° under mostly sunny skies, with a westerly wind of 6mph. Zero chance of showers!

FAST FACTS : The Rays have some impressive odds numbers against New York, but keep in the most of their damage was done in the Tropicana House of Horrors. Tampa does not play as well in Yankee Stadium, so take this overall data with a grain of salt.

BLAKE SNELL vs YANKEES : The 27-year-old Seattle, Washington native is in his fourth year of pro ball, and coming off an injury-riddled 2019. Early on he gave the Yankees fits, but the more recent vintage of Snell appears less invincible, especially in Yankee Stadium.

MASAHIRO TANAKA vs TAMPA : Since joining MLB in 2014, Tanaka has made 19 career starts against the Rays, posting a 104 record with a 3.07 ERA over 120.1 innings, including 125 strikeouts. He is still on the mend from a Summer Camp concussion, a line drive off the bat of Giancarlo Stanton. After a 10-day stint on the IL, Tanaka has been steadily regaining his form.

NEW YORK ROSTER MOVES : To make room for Aroldis Chapman, P David Hall was been whacked for the umpteenth time. The unkillable journeyman hurler will no doubt be back in pinstripes before we know it.