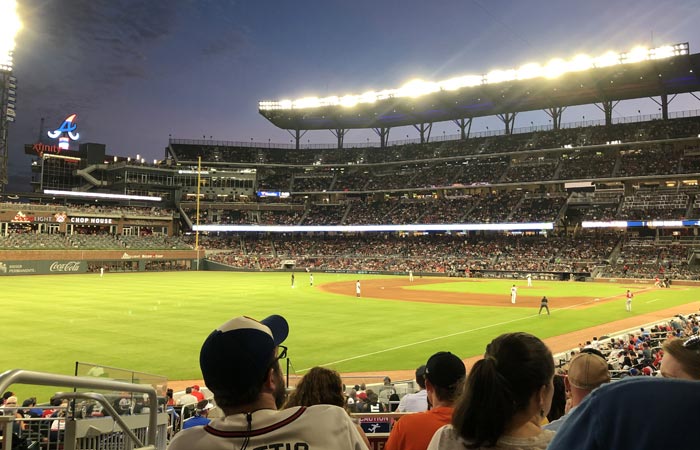 BOMBERS LOOK TO END ONE STREAK, MAINTAIN ANOTHER

Your 16-9 New York Yankees are holding down the American League East by mere percentage points over the 19-11 Tampa Rays (.640 to .633) — thanks in great part to our new BFFs from Buffalo (Toronto, technically) who accomplished what the mighty Bronx Bombers could not : win one, let alone two games at Tropicana Field over the weekend. The idle Yankees just sat there and backed into first.

After a 4-day vacation, the Yankees will defend that position starting with tonight’s opener of a 2-game set in Atlanta.

THE WISE GUYS : The oddsmakers have New York favored with a moneyline consensus of -200, and +170 for Atlanta. The Over/Under is 8.5. At this writing, late dineros are coming in on the Braves.

THE BALLPARK : Truist Park in Atlanta, Georgia is considered a hitter-friendly joint. With a high humidity mark (88%), and mistakes could be flying out of the place tonight.

WEATHER : Temperature at game-time is expected to be 78° (humidity 88%) under partly cloudy skies with isolated thunderstorms. Winds ENE at 6mph (or blowing in from right field), and a 35% chance of wet stuff, which decreases as the evening progresses. The state of Georgia looks like it will largely be spared the wrath of Tropical Storm Laura.

The National League East first place Atlanta Braves are coming off a weekend series win over the Joe Girardi’s Phillies, although their rotation is hurting right now. Atlanta has just called up top prospect Ian Anderson ($8,100), a right-hander who was the third overall pick in the 2016 MLB Amateur Draft. This will be Anderson’s major league debut.

Anderson is fortunate he’ll be facing a New York lineup that is significantly weakened with Judge, Stanton, LeMaheiu, Torres and Higashioka on the Injured List. The Yankees bullpen has also seen better days, with Tommy Kahnle done for the season, and the recent loss of Zack Britton (10-day IL but a hamstring will surely take a lot longer to mend). Manager Aaron Boone has his work cut out spreading out the workload between the guys still standing.

PREDICTION : This is a tough one to call. The Yankees are definitely limping into Atlanta, a squad that’s going in the wrong direction. But they are still a dangerous team. Last season’s ‘next man up’ battle cry was no fluke, and you can feel it coming on again. Sanchez, Voit, Frazier, Hicks and Gardy are guys you go to sleep on at your own peril. Voit and Frazier have been swinging good bats, and the rest can break out at any monent.

We’re feeling Cole will dig deep and both give his ‘pen a break, and allow the bats a chance to win it. 5-2 Yankees, and a much needed ‘W’.

On August 25, 1956, the Yankees released ‘The Scooter’, shortstop Phil Rizzuto after 13 years of service that featured 7 World Championship titles — including the run of 5 straight from 1949 to 1953. In 1950, Rizzuto won the American League MVP, playing an almost flawless shortstop and hitting .324 with 200 hits and 66 RBI.

A five-time All-Star and Hall of Famer, after retirement The Scooter became a beloved broadcaster for the Yankees, a position he would hold for over 40 years. He passed away on August 13, 2007. RIP Scooter.