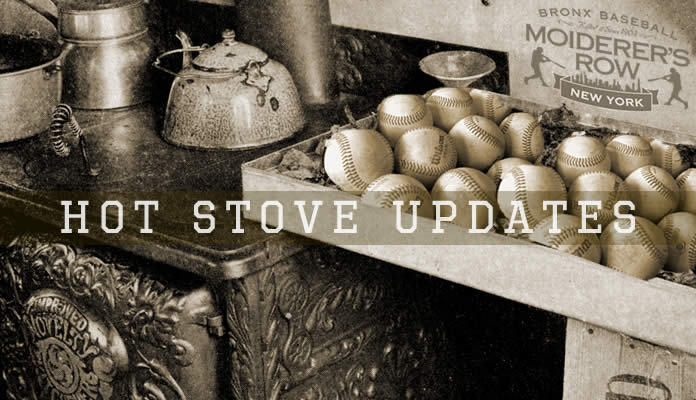 Press Release | The New York Yankees today announced Joe Girardi‘s coaches for the 2016 season, with Mike Harkey rejoining the staff as bullpen coach and Tony Pena taking on the role of catching instructor in addition to his responsibilities as first base coach. The club previously announced that Alan Cockrell would become the hitting coach and Marcus Thames would be the assistant hitting coach. Third base coach Joe Espada, pitching coach Larry Rothschild and bench coach Rob Thomson each return to the roles they served in 2015.

Pena, 58, will enter his 11th season on the Yankees’ Major League staff and fifth as first base coach, having held the position in 2015 and from 2006-08. This will also mark his ninth season as catching instructor, reassuming the role he held from 2006-13. He also served as the club’s bench coach from 2009-14. Prior to the 2013 regular season, he managed the 2013 World Baseball Classic-champion Dominican Republic team and became the first WBC manager to lead his team to an undefeated record (8-0).
Rothschild, 61, will begin his sixth season as Yankees pitching coach and his 42nd in professional baseball as a player, coach or manager. Since joining the Yankees in 2011, the club’s pitchers own a 2.90 strikeout-to-walk ratio (6,513K/2,247BB), the best such mark in the AL and the second-best mark in the Majors over the span. In 2015, Yankees pitchers matched their all-time franchise record of 1,370 strikeouts in a single season – a mark previously set the year before. Additionally in 2014, Yankees pitchers posted a 3.44 K/BB ratio (1,370K/398BB), which ranks as the sixth-highest mark in the Majors since 1900. Prior to joining the Yankees, Rothschild spent nine seasons (2002-10) as the Cubs’ pitching coach. Notably, Rothschild was the first manager in franchise history for Tampa Bay, having been named to the post on November 7, 1997.
Thames, 38, joins the Yankees’ Major League staff after three seasons as a Yankees minor league hitting coach. Following stints as the hitting coach for Single-A Tampa in 2013 and Double-A Trenton in 2014, Thames served in the same role with Triple-A Scranton/Wilkes-Barre in 2015, helping the RailRiders lead the International League in runs scored (622), batting average (.271) and OPS (.727).
The Mississippi native was selected by the Yankees in the 30th round of the 1996 First-Year Player Draft and played in parts of 10 Major League seasons with the Yankees (2002, ’10), Texas (2003), Detroit (2004-09) and Los Angeles-NL (2011), combining to hit .246 with 115 home runs and 301 runs batted in. Thames enjoyed his best season in 2006, hitting a career-high 26 home runs in 110 games with the AL-champion Tigers.
Thomson, 52, will enter his 27th season as a member of the Yankees organization and ninth on the club’s Major League coaching staff. The 2016 season will mark his third as the Yankees’ bench coach, having also held the position in 2008 and 2015. From 2009-14, he served as the club’s third base coach. The Ontario, Canada, native originally joined the organization in 1990 as third base coach for Single-A Ft. Lauderdale.

"He pitches better when he's mad, so I try to make him that way."