Chance Adams Tasked With The Improbable: Stop Boston At Fenway 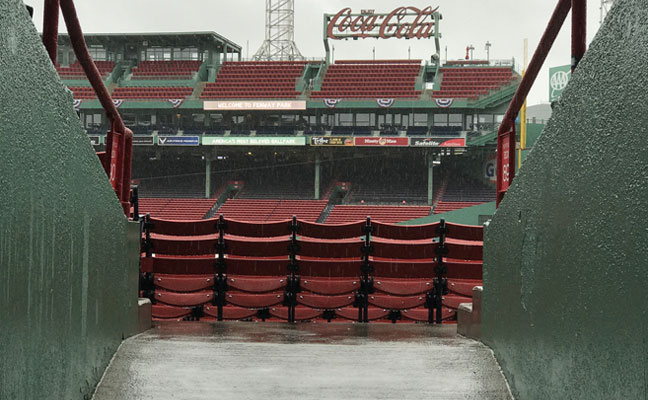 Although not under the circumstances anyone pictured, Yankees prospect Chance Adams ($4,800) will make his major league debut today at Fenway Park against the steamrolling Red Sox. Adams is presently the #13 prospect in the Yankees system, dropping from a high rating of #2 after offseason surgery to his pitching elbow.

Adams’ Road To The Show

The 23 year-old Arizona native was selected in the 15th round of the 2015 MLB Draft, and rose quickly through New York’s farm going from the Staten Island Yankees and the Charleston River Dogs (both Class A), to the Trenton Thunder (AA) to the Triple-A Scranton/Wilkes-Barre RailRiders by 2017.

You just know Red Sox Nation is hoping for a one-two knockout combination today. Knock the Yankees yet another game back in the standings, and destroy of one of their prized pitching prospects. With seemingly every hitter in the Boston lineup living right, there are no places of respite for Adams. How he navigates through especially the top of the order will be a daunting task. In terms of drafting Sawx in your lineup, it’s open season.

On June 15th, Nathan Eovaldi ($7,700) drew the start opposite the major league debut of another Yankee hurler, Jonathan Loaisiga. That time was a curiosity, this time it’s a death-match. The Sox traded for Nasty Nate at the deadline, sending AAA lefty Jalen Beeks to the Tampa Rays in exchange.

Eovaldi has always drove me crazy. When he’s on, he has perfect-game stuff, and one of these days he’s going to throw one — preferably not today.

As New York fans well know, his four-seam fastball hits 100mph on occasion, and he mixes in a cutter in the low 90s, a slider and split in the high 80s, and a 12 to 6 breaking ball thrown once in a blue moon. Here’s an excellent breakdown on Eovaldi’s arsenal by Jeff Sullivan over at Fangraphs.

If there is one Yankee than should be in your Draft Kings lineup today it’s shortstop Didi Gregorius ($4,900). Everyone, including Didi, have sample sizes not worth considering, but he’s the only consistently reliable at-bat at the moment. For today’s contest, we’re backing off even a mini-stack against Evo.

There’s always a very decent chance Evoaldi will get torched, but it just seems everything is breaking Boston’s way at present, so why shouldn’t it continue. If the Yankees do indeed get swept and limp out of Beantown 9.5 games out, then everything changes. They’ll now be fighting off the surprisingly efficient Oakland A’s for home-field advantage in the Wild Card play-in game. And playing that game in Oakland is something that simply cannot be allowed to happen. Short of a historic collapse by the Red Sox (they don’t seem to do that anymore, huh?), there will be little joy, only pressure, in the remaining days of the season.