Never mind the calendar. Winter is officially over. The 2016 New York Yankees opened up Spring Training camp on Tuesday in Tampa, and it began with a Joe Girardi media Q&A session. He was hit with questions from the press that the pinstripe faithful have been bantering about over the long, cold winter — literally minutes after Carlos Beltran, Alex Rodriguez and Brian McCann went down 1-2-3 in the bottom of the 9th on October 6th at Yankee Stadium, sealing a 3-0 loss to the Houston Astros in the Wild Card play-in game.

And what do the Yankees do after inglorious Octobers? Reload. Sign a stud free agent or three, seize the headlines and set off the buzz amongst talking heads, beat writers and fans alike. But not this time. For the first time since anyone can remember, the Yankees were the only team in MLB *not* to sign a free agent in the off-season. Although they did come close to signing pitcher Tommy Hunter, but backed off after concerns on his physical results. Check out Pinstripe Alley for the report.

It’s being reported MLB Commissioner Rob Manfred will soon announce a decision on three pending investigations of domestic violence allegations, including the Yankees’ Aroldis Chapman. There is talk that a possible suspension could include spring training. Check out Mark Feinsand‘s piece in The Daily News, where he writes:

Assuming Chapman is disciplined by Manfred – as most in the game believe he will be – the possibilities include a ban from major-league camp, a ban from all team facilities including minor-league camp, or simply a suspension from regular-season games which would allow Chapman to remain with the team between now and Opening Day.

Jose Reyes and Yasiel Puig are the other two players awaiting the league’s ruling.

In other pitching-related player news, Masahiro Tanaka passed a 20-pitch bullpen session with no red flags according to pitching coach Larry Rothschild, and is slated to make his first start of the spring on March 12 against the Atlanta Braves. Fireballer Nathan Eovaldi says his “elbow woes are behind him” as also reported by Mark Feinsand.

Ghosts of Spring Trainings Past

Not that anyone has to be reminded Spring Training records are basically useless, but let’s take a quick look back at last year when the Oakland A’s edged the Kansas City Royals for the top Cactus League spot with a 22-11 mark, and leading all of MLB in runs scored with 199.

The Athletics would end up in last place in the AL West, 20 games out with a 68-94 record. Only the Philadelphia Philles and Cincinnati Reds had worse records.

But it appeared KC was on a mission after narrowingly losing to the San Francisco Giants in the thrilling World Series of 2014. The Royals’ 20-10 mark foreshadowed their focus on finishing the job, which they ultimately did by streamrolling the Mets in the 2015 Fall Classic.

The Yankees’ 17-16 record in last year’s Grapefruit League action was a harbinger of things to come. Many predicted the 2015 Yankees would be about a .500 team, and despite the great start, they played like crap after the All-Star break while Toronto seemed to never lose.

New York’s 87-75 record (.537) was just good enough to back into a Wild Card slot, but were almost effortlessly dispatched by the Houston Astros, — shut down and shut out behind the arms of Dallas Keuchel and a lights out bullpen for the last nine outs. The lifeless, punchless Yankee offense of August and September carried on into the elimination game and was in truth no match for any number one starter in the postseason.

It was a mercy killing.

It was 1951. Del Webb, co-owner of the Yankees at the time, lived in Phoenix and coordinated what amounted to a ‘barnstorming’ tour for the Bronx Bombers, who for the first time ever played Spring Training games in the great American West.

In the spring of 1951, for the first and only time, the Bronx Bombers went West for Spring Training to get rejuvenated in Arizona and California. And there emerged Mickey Mantle, the youthful star who would not only lead the dynasty to another string of titles but also replace the irreplaceable Joe DiMaggio. ‐ (h/t: Spring Training Magazine)

Also check out The Captain’s Blog for a great piece on Yankees’ entire spring training history, and details of that eventful spring in the desert, which included contract holdouts by Eddie Lopat and Yogi Berra, plus the emergence of a young Mickey Mantle.

MEMORY LANE : On today’s date in 1996, the Yankees inked Dwight Gooden as a free agent. After 11 years with the Mets that were filled with highs and lows (literally), Gooden agreed to a three year deal, which began with a $950,000 salary for the 1996 season. The Yanks needed pitching and Gooden needed a fresh start. Banned by Major League Baseball for the entire 1995 season, Gooden got off to a rough start in The Bronx. After 5 shaky starts and a double-digit ERA, the Yankees were considering releasing the former Cy Young Award winner, but ended up banishing him to the bullpen. When David Cone went on the DL with a shoulder aneurysm, Gooden was given another crack at the starting rotation. This time he didn’t disappoint.

On May 14th, Gooden tossed the only no-hitter of his career, dominating the Seattle Mariners at Yankee Stadium in 2-0 win for the Yankees. A rookie named Derek Jeter was playing shortstop and caught a popup for the 27th and final out of the game.

Gooden pitched well in Cone’s absence, but was not included on the post-season roster. In 1997, he earned $2M, making 19 starts and finishing with a 9-5 (4.61) mark. His only post-season appearance ended in a no-decision, as the Cleveland Indians would get to the Yanks’ bullpen. New York didn’t extend a contract offer following the ’97 season, and Gooden signed with Cleveland for the ’98 campaign. Today in 1913, Tommy Henrich was born in Massillon, Ohio. Twenty-seven years later, be broke in pro ball with the Yankees. He played his entire 11-year career with New York, retiring at the finish of the 1950 season. During that span, Henrich was selected to 5 All-Star teams, and earned 7 rings for Yankees’ World Series victories. As reported by mlb.com’s Anthony DiComo at the time of Henrich’s death in 2009 — “Henrich, as (Yogi) Berra alluded, was best known for his exploits in October. In 1949, Henrich hit the first walk-off home run in World Series history off Brooklyn’s Don Newcombe, accounting for the only run in a 1-0 victory over the Dodgers.” From 1939 to 1942, Henrich wore the number 7 on this uniform, and upon returning from a three year stint in the Coast Guard during World War II in 1946, he wore number 15 until the end of his career. 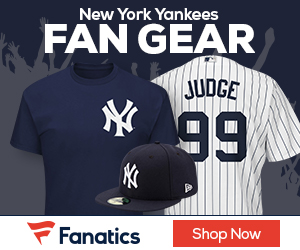